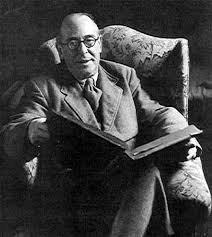 I have been blessed with many spiritual mentors during my journey and continue to meet new ones along the way. But I always seem to come back to C.S. Lewis. I suppose that one theme that draws me to him is that he doubted and was honest about it. Rather than avoiding or dismissing his doubts, he would embrace them and wrestle with them. In my own journey as a Doubter, I have always found hope when I return to C.S. Lewis. He has helped me see my doubts as a doorway.

Lewis is perhaps best known nowadays as the author of The Chronicles of Narnia, a series of children’s stories with strong spiritual themes. They are stories any child or adult can enjoy.

Many of his non-fiction works have enriched my journey. One is Mere Christianity which touches on his own spiritual journey. Another is The Great Divorce which helped me find a belief about the afterlife that was not grounded in fear.

I think, though, that I have been most touched by his efforts to address the spiritual problem of pain. Lewis was a man, much like Harold Kushner, whose beliefs about pain were grounded in reality.

Lewis had been living his life as a middle-aged professor when he met Joy Davidman. He fell in love and married Joy, happy beyond belief. But in short order tragedy struck as his beloved wife died from cancer. He was challenged to apply his beliefs that God indeed had a plan behind our suffering. This journey is portrayed in the play and film Shadowlands.

Out of his grief came the best book I know of on grief — his simple A Grief Observed, which is a sharing of the first year after his wife’s death. The book ends not with some happy note of closure but with the reality that Lewis was still grieving and would continue to do so the rest of his life.

I counseled with one beautiful woman who had lost her husband of over 50 years. She shared with me that she had been given about 10-15 books on grief by well-intentioned friends. Being somewhat compliant, she had read them all and shared that she was totally confused. “One book tells me to give my husband’s belongings away. Another tells me to keep them as long as I want. All these books contradict one another!” So….I gave her another book to read! It was Lewis’ A Grief Observed. She thanked me when she returned stating that it was the first book she’d found helpful not because it had any answers but because it helped her see that her grief as she experienced it was normal and good.

Here then are a few jewels I have found in C.S. Lewis’ words:

“Doctrines are not God; they are only a kind of map.”

“Very often the only way to get a quality in reality is to start behaving as if you had it already.” (This is a more eloquent version of AA’s “Fake it ’til you make it.”)

“Every war, every famine or plague, almost every deathbed, is the monument to a petition that was not granted.”

“The world is a great sculptor’s shop. We are the statues and there is a rumor going around that some of us are some day going to come to life.”

Further Reading: A good place to start reading C.S. Lewis is the sampling of his works found in The Joyful Christian.

I am a clinical psychologist and have an abiding interest in matters spiritual.
View all posts by richp45198 →
This entry was posted in psychology, spirituality and tagged C.S. Lewis, grief and grieving, suffering. Bookmark the permalink.