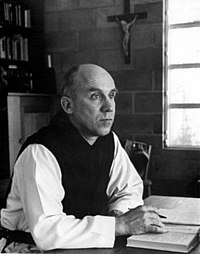 It was shortly after I left the Army in 1979 that I began my search for a bridge between psychology and spirituality. One of the early architects of that bridge was Thomas Merton.

I had a copy of Merton’s well-known biography The Seven-Story Mountain but found some of the guidance I sought in other of his writings.

As a young man, Thomas Merton lived the fast life but when that life began to be empty, he turned to spiritual pursuits. His search eventually took him to the Abbey of Gethsemani in Kentucky. There he found his way and became a Trappist monk.

While Merton treasured the life of a monk, he found in his meditation and prayer a connection to mankind that he would later articulate in passionate writings on behalf of racial justice as well as opposition to nuclear proliferation. Finding a connection to others by looking inward was an early bit of guidance Merton offered me.

Thomas Merton also gave me permission to pursue my growing interest in other religions. Merton spent much of his life exploring common ground with other paths, especially Zen Buddhism. He made connection with Thich Nhat Hahn who would also become a mentor for me.

Merton has offered me hope through being very human. He fell in love with a nurse who cared for him and conducted a correspondence with her. While he may have struggled, he also celebrated this woman’s beauty and his attraction to her. This humanness made Merton more accessible as has the humanness of other spiritual mentors such as Henri Nouwen and Dietrich Bonhoeffer. Merton and others have helped me revise my understanding of sainthood.

In New Seeds of Contemplation Merton opened for me the notion of the God of my understanding long before I came to know the Twelve Steps. Merton wrote: “Our idea of God tells us more about oursleves than about Him.” (p.15) He also reminded me to quiet the noise in my head when he wrote “So keep still and let Him do some work.”(p.261)

Also important on my journey was Conjectures of a Guilty Bystander. In the spirit of paradox, Merton observes: “God help the man who thinks he knows all about himself” (p.150), a powerful caution against my arrogance. And as I observe the current lack of dialogue in politics as well as religion, these words of Merton are relevent: “…when one is firmly convinced of his own rightness and goodness, he can without qualm perpetrate the most appalling evil.” (p.170)

Merton died in Thailand while attending an inter-faith conference between Catholic and non-Catholic monks. The seeds he planted in my mind and heart many years ago continue to yield fruit.

Reflection: 1. Who are some early influences on your journey?

2. What role does silence play on your journey?

I am a clinical psychologist and have an abiding interest in matters spiritual.
View all posts by richp45198 →
This entry was posted in spirituality and tagged Thomas Merton, Zen Buddhism. Bookmark the permalink.