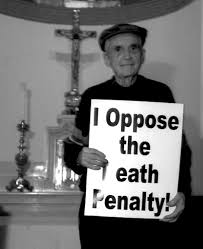 Being a prophet has always been a dangerous profession, largely because a prophet spends his/ her time calling society’s attention to the world’s evils. As such, prophets are persecuted, condemned, and at times thrown into prison. Such a prophet is Father Daniel Berrigan.

Fr. Berrigan is a Jesuit priest who has spent the majority of his 70+ years as a priest challenging Christians in general and his own Church in particular to look closely at harsh realities such as war, poverty, and the death penalty. He has suffered as a result, having been arrested numerous times and having spent time both on the run as a fugitive and in prison.

And yet he has embraced such hardship as the price he pays for living a Christian life. Listen to his words the first time he went to prison: “For the first time, I put on the prison blue jeans and denim shirt, the clerical attire I highly recommend for a new church.”

Berrigan is known primarily for his protests against the Viet Nam War and particularly for his participation in the burning of draft board files in Catonsville MD. But his ministry of outcry remains active even with him in his 90s. As such, he was arrested in New York City in 2012 as he participated in a protest on behalf of Occupy Wall Street.

When I read Daniel Berrigan, his words make me uneasy as he challenges me to examine just how committed I am to peace: “But what of the price of peace? I think of the good, decent, peace-loving people I have known by the thousands…How many of them of them are so afflicted with the wasting disease of normalcy that, even as they declare for peace, their hands reach out with an instinctive spasm in the direction of their loved ones, in the direction of their comforts, their home, their security, their income, their plans..”

I once read that prophets poke holes in our universe so that light might better shine in. But we don’t always like that light for sometimes it shows us as we are.

But then Jesus Christ, Mohammed, Buddha, Gandhi, Marin Luther King, Daniel Berrigan and other great prophets make it very clear that the righteous way is not the easy way.

I am a clinical psychologist and have an abiding interest in matters spiritual.
View all posts by richp45198 →
This entry was posted in spirituality and tagged Catonsville Nine, Daniel Berrigan. Bookmark the permalink.

5 Responses to On Martyrs: Daniel Berrigan