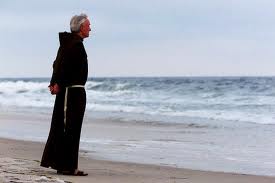 Fr. Mychal Judge is best known to most of us for his courageous actions as a New York City Fire Department Chaplain. On 9/11, he sacrificed his life as he administered the Last Rites.

There is a famous picture of Father Mychal being carried away from the site of his death. But I selected the above picture because, as significant as was his death, his life was more than that last act of heroism. Much more.

Fr. Mychal was a Wounded Healer. He drew upon his own struggles to reach out to many long before 9/11.

First of all, he was a recovering alcoholic some 23 years clean and sober at the time of his death. He remained active in Alcoholics Anonymous and, through his own recovery, helped others find their way to sobriety.

Fr. Mychal was also gay, a Franciscan priest in a religious organization not known for its welcoming attitude toward gays. While he did not advertise his sexual identity, he worked tirelessly on behalf of gay rights. When gays were turned away by the Catholic Church, he continued to minister to members of Dignity, a support program for Catholic gays and lesbians. Even moreso, he tended to the spiritual needs of many New Yorkers suffering and dying from AIDS. He reached out to them in the days when people still believed AIDS was contagious.

For me Fr. Mychal has come to represent several themes. First of all, he is a brother in recovery, one more person whose example has helped me find my own way. Second, he stands as an example of what is best about the Catholic Church. He has helped me see that there are really two Catholic Churches out here. One is authoritarian and repressive. But there is a second Church that welcomes all gays and lesbians, immigrants, persons of all race and color, veterans. That Church often comes under attack such that these times for that Church are especially hard in these days when gays and lesbians are still not welcome and persons are censured for speaking out. This second Church is invisible but I belong to it and am proud of that membership.

Fr. Mychal was rightly loved and revered by the New York City Fire Department. His heroism, however, was present long before in he died amidst the ashes.

Reflection: In what ways are you wounded? Can those wounds be of help to others?

Further Viewing: There is a very fine documentary about Fr. Mychal’s life titled Saint of 9/11. It is available through Netflix or through Amazon.com.

I am a clinical psychologist and have an abiding interest in matters spiritual.
View all posts by richp45198 →
This entry was posted in spirituality and tagged 9/11, Fr. Mychal Judge, martyrs. Bookmark the permalink.

The Art of Blogging

Little flecks of inspiration and creativity

A community of meditation, mindfulness, prayer and contemplation

THE BEST OF POETRY